The Centre held its Inaugural Event on Tuesday 22nd January 2013 at the University of Strathclyde, Glasgow. The event was packed out, with senior representatives from Finland, Africa, the USA, and the UK in attendance. UK Government Minister for Culture, Communications, and Creative Industries, The Hon. Ed Vaizey, MP, gave the keynote speech, formally marking the opening of the Centre.

Delegates were welcomed to the event by University of Strathclyde Vice-Principal, Professor Kenneth Miller, and following some introductory presentations from Dr David Crawford and Professor Bob Stewart, Mr Andrew Stirling, Chair of the Centre, gave an overview of what White Spaces are and why they matter. This was followed by a presentation by Mark Waddell from the BBC, outlining some of the opportunities that exist in applying White Space for on-demand TV services delivered via broadband, and emphasising the need for cooperation in tackling the technical challenges of pushing sharing efficiency to the limits while co-existing with digital terrestial television transmissions. A brief overview of some of the Centre’s current R&D activities was given by Dr Stephan Weiss.

In his keynote address, Mr Vaizey said: “The University of Strathclyde has a proud history of leading research on mobile communications technology and this new centre promises to take that work even further. This new facility provides an excellent opportunity for the UK to lead the development of this technology and realize the economic benefits of being at the forefront of this field.”

Mr Vaizey also announced the launch of a UK industry Programme Group for Dynamic Spectrum Access which will run alongside the Centre for White Space Communications to ensure industry engagement to get the best from research advances. Led by the Digital TV Group, the aim of the new group is to ensure that white space and broader improvements in spectrum access get brought into use quickly and in a well ordered ways that get the best from spectrum and giving Digital terrestrial TV viewers the protection they expect.

The Minister’s keynote speech was a powerful demonstration of the UK Government’s commitment to build on the lead already established by the UK to secure benefits for industry and the UK economy, and to help get improved broadband into remote/rural areas as soon as possible.

The rural theme selected for the event was strongly reflected in the presentations and in the lab demonstrations. David Crawford gave an overview of the Isle of Bute White Space Trial project, and Tara Morrison, from the University of the Highlands and Islands, presented some results of a survey of White Space trialists on Bute, who have been receiving broadband as part of the trial.

Chris Gibbs, Director of Future Options at Openreach, outlined Openreach’s plans for rolling out optcial fibre in the UK, and described how White Space technology has the potential to play an important role in reaching those parts of the country (typically rural areas) which are difficult to reach.

Opportunities for TV White Space and dynamic spectrum access are not confined to the UK, however. Jim Beveridge, Senior Director for International Technology Policy at Microsoft, highlighted the need for affordable internet connectivity in developing countries and outlined some of the ways in which White Space technology is set to help with achieving this goal.

An update on TV White Space developments in the USA was given by John Malyar, Chief Architect at Telcordia Technologies, Inc., one of two companies in the US who have FCC-authorized geolocation databases. (Geolocation databases are likely to be used by most countries to manage access to spectrum by White Space Devices, and are therefore extremely important in terms of maximizing overall system performance and spectral efficiency.)

Heikki Kokkinen, CEO of Finnish company Fairspectrum, presented some results of some recent trials in Finland, and introduced Fairspectrum’s geolocation database which was recently approved by the Finnish telecommunications regulator, FICORA.

It was also noted that in order for White Space device technology to be affordable and commercially viable, the economies of scale that result from harmonized standards would be important. To this end, Jussi Kahtava, formerly of Nokia and currently Director of Allied Spectrum Associates, gave an overview of some of the standardization activities that are currently taking place within the European Union.

Other presentations included an overview of technology and applications from Paul Egan, VP Business Development at Neul, and an analysis of the economic impact of licence-exempt spectrum from Richard Thanki of the Univeristy of Southampton.

Summarizing some of the benefits and uses for White Spaces, Martyn Lee from BSkyB emphasized the need for innovative solutions to ensure that UHF interleaved spectrum is utilized efficiently, and suggested some practical next steps to take things forward.

Demonstrations being exhibited in the Centre’s lab area included: 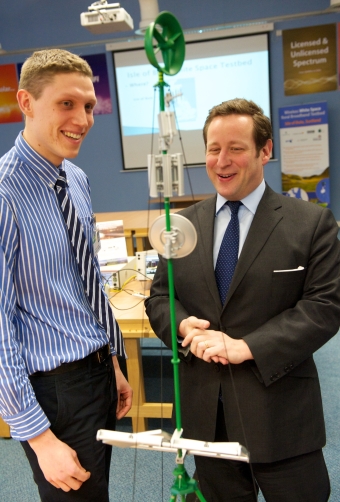 In his concluding remarks, David Crawford thanked all of the delegates and speakers for helping to make the event a success, and re-affirmed the Centre’s goal to be a leading centre of excellence and industry-focused R&D centre in the area of White Spaces and dynamic spectrum access.

The Centre gratefully acknowledges co-sponsorship of the event by BT, Microsoft, and Sky.

Copies of the speakers’ presentation slides are available below.

What are White Spaces and Why Do They Matter?
Andrew Stirling, Larkhill Consulting

Do Machines Dream of their own Network?
Paul Egan, Neul.

The ‘Real’ Impact of High-speed Broadband on Rural Communities
Tara Morrison, University of the Highlands and Islands