On Thursday 14th May, CWSC held a one-day event at the University of Strathclyde’s Technology and Innovation Centre to mark the successful launch of the Glasgow TV White Space pilot network. The network, spanning the University of Strathclyde’s city centre campus, has been created by the Centre for White Space Communications (CWSC), supported by the Scottish Government, EPSRC, Microsoft, Mediatek, 6Harmonics, and Spectrum Bridge, in cooperation with Ofcom (the UK communications regulator).

The pilot network demonstrates how dynamic spectrum access can help to exploit unused TV-band spectrum in urban areas for broadband gap filling and smart city sensor support. Previous pilots, such as on the Isle of Bute and in Annan, demonstrated how spare TV spectrum could be used to deliver affordable broadband in rural areas.

Highlights from the programme, included:

Centre for White Space Communications (David Crawford), introducing the background to the Glasgow TV white spaces Pilot and demonstrating how the new network spans the campus – delivering Wi-Fi access in defined locations and gathering live streams from remote image sensors. CWSC also presented eagerly awaited results on a programme of in-home tests of the first Super Wi-Fi (802.11af) prototypes. These showed the clear advantage of including the TV white space frequencies alongside the conventional 2.4 GHz and 5 GHz bands.

Ofcom (Claire Mack) introduced the background to the regulations and pilot framework, and Ofcom’s recent decision to press ahead with licence exemption of TV white space technology by end of 2015. She also noted that Ofcom is expecting to make a statement on the use of manually configured devices, where the device position is entered manually (rather than detected automatically), around September 2015. 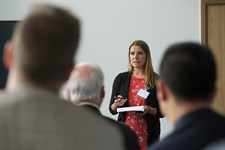 Also part of Ofcom’s UK TV White Space Pilot, alongside Glasgow, was Cloudnet’s “Wi-Fi on the ferries”. This is a perfect example of how white space technology can empower communities to provide broadband coverage in areas which are not yet commercially attractive to major operators. Cloudnet, an Orkney-based SME, had rolled out a white space network enabling passengers on inter-island ferries to enjoying Internet access – where previous only a poor terrestrial TV service had been available. Now Orkney citizens and the many visitors who flock to Orkney each year can enjoy the benefits of broadband connectivity.

Building on Cloudnet’s deployment in the Orkneys, BAE Systems (Bob Wilmott) described how the use of white space technology could enable useful broader marine connectivity, with ranges of up to 40 km.

Kings College London (Oliver Holland) described a wide ranging collaboration between KCL, NICT (Japan), and other industry partners to explore the usability of white space capacity in the London area – with encouraging results.

NICT (Japan) (Takeshi Matsumura) described NICT’s evaluation of white spaces in London, working with KCL, as well as in Japan, where they had looked at remote rural as well as urban applications.

Microsoft (Jim Beveridge) painted the broader international backdrop – with ongoing standardization, technology development, and adoption of dynamic spectrum access across the globe. Microsoft has been supporting pilot TV white space deployments in Africa and Asia, as a leading member of the Dynamic Spectrum Alliance, whose members also including Google, Facebook and University of Strathclyde.

Fairspectrum (Heikki Kokkinen) provided an overview of an exciting new addition to the spectrum management toolbox – the geolocation database.

NHS (Drew Inglis) illustrated the challenges of delivering high quality health services (and emergency response) in the absence of good connectivity – particularly in rural areas. He contrasted this to the wall-to-wall Wi-Fi coverage enjoyed within the new Southern General Hospital campus on the outskirts of Glasgow.

The wide-ranging contributions to the event show how TV white space technology and regulation have moved forward to the point where TV white space is a valuable enabler for end users to address their connectivity challenges – whether in urban, rural or marine settings. The Glasgow Pilot illustrates the technology’s usefulness in an urban setting, whilst the Orkney ferry Wi-Fi deployment shows how the technology can empower communities to harness unused spectrum capacity and thereby help to fill gaps in broadband access coverage. Work completed in both of these projects would become a key component in the second phase of the TVWS pilot network.

Copies of the speakers’ presentation slides are available below.

TVWS in the Orkney Islands
Greg Whitton, Cloudnet IT Solutions